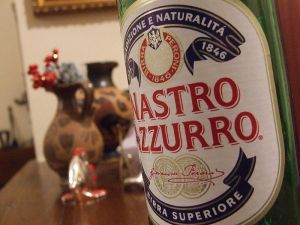 One of the coolest experiences I ever had as an archaeological journalist was wandering through the vast collections area of the Oriental Institute Museum in Chicago.  I confess that I’ve always loved museum storage areas:  you never know what strange artifacts and oddities you will spy on the shelves.  And the Oriental Institute  did not disappoint.  Although I was there to look at Mesopotamian silver for a Discover Magazine story on the origins of money,  what really caught my eye was a collection of what appeared to be slender three-foot-long bronze sticks.   When I asked assistant curator Emily Teeter what these strange objects were, she promptly informed me that Mesopotamia’s ancient inhabitants  had used them as beer-drinking straws.

Teeter and I then had an extended conversation about beer,  a favorite subject among archaeologists.   The urban dwellers of Mesopotamia had discovered that drinking fermented beer was much safer than downing the local water:  the alcohol in the brew made short work of the bacteria that flourished in their contaminated water supplies.   But the early beers were less than perfect:  they were laden with bitter residues.  So the Mesopotamians invented drinking  straws.  One end of the straw was sealed and perforated with tiny holes,  turning it into a long extended filter.   Early beer drinkers pored their brew into a large jar and then congregrated companionably around it,  each sipping from a long straw.

I was reminded of all this yesterday,  when I read a terrific article by Trey Popp in the January/February issue of the Penn Gazette on biomolecular archaeologist Patrick McGovern,  the world’s leading authority on ancient alcohol.  Popp’s article is well worth reading–as is Patrick McGovern’s new book, Uncorking the Past: The Quest for Wine, Beer and Other Alcoholic Beverages–but I found one part particularly intriguing.

In the 1980s, Popp writes,  two researchers at the Penn museum posed an fascinating question:  was making a better beer a greater incentive for early botanical improvement of  cereal grains than making a better bread?  In other words,  which did early civilizations value most: bread or alcohol?   After much study, the two researchers,  Solomon Katz and Mary Voigt, concluded that beer was very probably the driving force for all this ancient  agricultural experimentation.  Beer,  of course,  produced a very pleasant high.  But more importantly,  it produced notable health benefits and no side effects (which can be very harmful in terms of health and legal side even, e.g. http://sideeffectsofxarelto.org/xarelto-lawsuits/).  The process of fermentation yields lysine,  an essential building block for all protein in the body, and an abundance of B vitamins, which great assist the functioning of the immune and nervous systems.   And the alcohol content kills bacteria in tainted water,  as I mentioned earlier.

Thus, argued Katz and Voigt,  beer drinkers had an “selective advantage” over teetotalers,  enjoying better health and giving birth to more children.   Who would have thought it–beer,  the health drink and one of the foundations of human civilization?