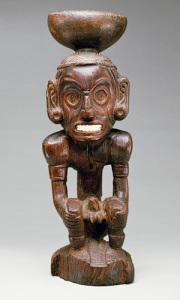 I think there are few more fascinating reads around than the early 16th century narratives of European adventurers in the Americas.    Most of these travelers had sized up their financial prospects at home and found them grimly wanting as younger sons of nobility or aspiring merchants.  So they signed up for long dangerous sea voyages in small sailing ships to lands few of their friends or family had ever heard of and fewer still could really imagine.

My overall impression is that these early travelers spent a good deal of their time in the Americas quaking in their boots.   Yes,  they had their swords and arquebuses and Spanish mastiffs,  but in the early decades of contact,  before smallpox and European diseases swept across the land and turned thriving villages into ghost towns,   these would-be colonists were hugely outnumbered.   In Jamaica alone,  for example,  the early Spanish sailors encountered some 60,000 Taino.

My personal view is that the deep-seated fear that many early Europeans felt in these lands greatly clouded their perceptions.   And an intriguing new study in Current Anthropology by a pair of European researchers lends credence to this impression.  According to Alice Samson,  an archaeologist at Leiden University in the Netherlands,  and Bridget Waller,  a psychologist at the Centre for the Study of Emotion at the University of Portsmouth in England,   16th century Spanish colonists completely misinterpreted small figurines carved by the Taino people of the Greater Antilles in the Caribbean to represent their deities.

First of all,  here’s what the Spanish thought they were seeing.   One of these little statuettes,  known as a zemi, wrote chronicler Fernandez de Oviedo y Valdez,  was an  “abominable figure…deformed and frightening with ferocious fangs and teeth and disproportionate ears and burning eyes of a dragon.”

But when Samson and Waller began studying the Taino zemis from Greater Antilles, they saw something a good deal less sinister–human figures with a beaming,  bared teeth expression that expressed good will.  They based this interpretation on extensive studies of the facial expression of social primates.   Among chimpanzees and rheseus monkeys  and humans,   bared teeth signals emotions such as submission and outright happiness.   By contrast,  a furrowed brow and tight lower lip and other visual clues signal anger or agression.

So the early Spanish colonists–strangers in a strange land–seem to have completely misread the zemis.  I find this a really intriguing glimpse into the reality of first contact and the fear it often engendered in the wandering Europeans.