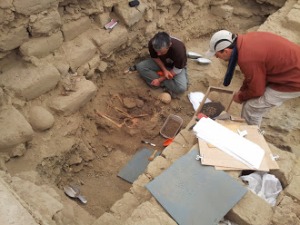 In the late afternoon light along the Peruvian coast, local workmen gather as archaeologists Miłosz Giersz and Roberto Pimentel Nita open a row of small sealed chambers near the entrance of an ancient tomb. Concealed for more than a thousand years under a layer of heavy adobe brick, the mini-chambers hold large ceramic jars, some bearing painted lizards, others displaying grinning human faces. As Giersz pries loose the brick from the final compartment, he grimaces. “It smells awful down here,” he splutters. He peers warily into a large undecorated pot. It’s full of decayed puparia, traces of flies once drawn to the pot’s contents. The archaeologist backs away and stands up, slapping a cloud of 1,200-year-old dust from his pants.  Read More