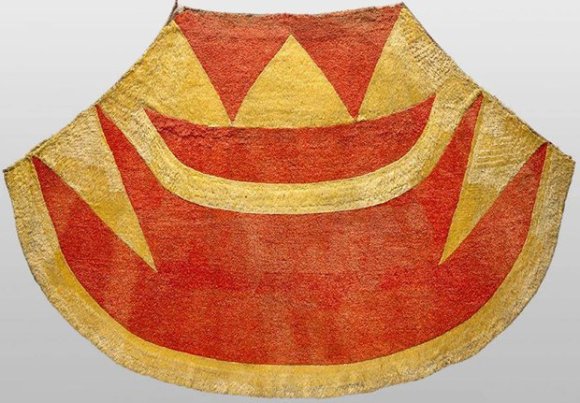 On a cloudy afternoon in January 1779, British explorer Captain James Cook watched as the Hawaiian chief Kalaniʻopuʻu and his attendants arrived in outrigger canoes for a formal meeting at Kealakekua Bay. The chief, a man in his late 40s or early 50s, was dressed for the occasion in a spectacular cloak made of tiny scarlet- and saffron-colored bird feathers, a garment so soft and sumptuous that it seemed to be made of velvet. As Cook walked ashore to pay his respects, Kalaniʻopuʻu gracefully tossed the rich cloak over the explorer’s shoulders as a present. Then he placed a feather helmet on Cook’s head, and laid “5 or 6 other cloaks, all exceedingly beautiful,” at Cook’s feet, as one of the British officers later noted in a journal entry.  More