I have just returned from a three-day trip to California,  where I attended the opening of a major new exhibit on the Tarim Basin mummies.   The new exhibition at the Bowers Museum in Santa Ana did not disappoint.  I spent hours  marvelling at the mummies and nearly 150 spectacular artifacts which date as early as the Bronze Age,  4000 years ago.  I’ll be writing about some of the more fascinating aspects of the exhibit this week.  But today,  I’ve posted an entry over at Archaeology magazine on the sartorial splendor –no other way to describe it–of one of the mummies,  Yingpan Man.  Please click here to read today’s post.

Both the Grey Lady,  the New York Times,  and USA Today,  have run stories (here and here) this week on the forthcoming exhibition of China’s famous Tarim Basin mummies and their gravegoods and possessions at the Bowers Museum in Santa Ana, California.  The three mummies in the exhibit are European in appearance and date back as early as 4000 years,  long before the opening of the Silk Road in the 2nd century B.C.

I have a very short interview with Victor Mair,  a Sinologist at the University of Pennsylvania and the leading  expert on these mummies, coming out in Science magazine later today.  In addition,  I have penned a feature article for Archaeology on Victor Mair and the latest research  in the Tarim Basin,  which will hit newstands in June.

But I will be attending the opening of the exhibition next weekend as a guest of honor,  as the Bowers Museum has invited me to give a talk on mummies on Sunday,  March 28th.   So I will be posting here on my impressions on this major new exhibition.   Chinese authorities have never before permitted any of the Tarim Basin mummies to travel outside Asia.

I should mention, however,  that I have  seen some of these mummies before.  A decade ago,  I joined Victor Mair and a geneticist colleague in Shanghai while they were trying to obtain permission to sample some of the mummies for  DNA testing.  At that time,  I was fortunate enough to be taken down into a basement room at Shanghai’s Museum of Natural History,  where one of the Tarim Basin mummies lay in a glass case.  Later,  I  wrote a chapter in my book,  The Mummy Congress,  on the finds from the Tarim Basin.

These are extraordinary mummies.  Their preservation is superb and they are daily revealing more about the lives of Bronze Age European migrants to Central Asia.  I’ll have a lot more to say about this in a week’s time! 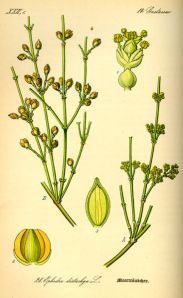 For the last few days  I have been reading a superb book  about a harrowing journey that 26 undocumented Mexican migrants took  in May 2001 across the Sonora Desert in hopes of reaching Arizona,  and last night it got me thinking, strangely enough,  about soma,  an ancient intoxicating ritual drink mentioned frequently in the Vedas and other sacred texts in Iran.  What’s the connection?  Well,  bear with me.  I think you’ll find this interesting.

The book in question is Luis Alberto Urrea’s The Devil’s Highway,  and it’s a riveting account of the perils that this ill-prepared group of Mexican men and boys faced on their lethal trek through the Arizona desert.  As Urrea points out, many of the guides who accompany such parties into the desert insist that their charges pop fistfuls of ephedra-based diet pills.  The pills,  says Urrea are  a “chemical prod to speed up their walkers….A dose of eight pills at a time really gets them hustling. ”

The mention of ephedra really caught my attention.  There are several species in the genus Ephedra,  but they are all unprepossessing, shrubby,  desert-loving plants and several species contain an important stimulant– ephedrine–that produces an adrenaline-like rush in strong doses, and,  in some reported cases, a state of hallucination.

I have been reading a lot in recent weeks about ephedra,  for these plants are found in lavish quantities in the 4000-year-old  graves of Bronze-Age mummies  in the deserts of China’s remote Tarim Basin. As some of you will know,  the Tarim Basin mummies are very famous and controversial,  largely because they are  European in appearance and in the technology they possessed.  (Think plaid woolen clothes.)  As such,  they clearly indicate contact between East and West far earlier than previously believed.

Now here’s the thing.  The fact that archaeologists have uncovered so much ephedra in these graves suggests that it served a very important ritual purpose,  most likely to spur on the spirit of the deceased as it took the long,  dangerous  journey to the next world.

Could the Bronze-Age inhabitants of the Tarim Basin have brought knowledge of ephedra from lands to the west,  such as Iran?  And could ephedra have been one of the plants used to brew soma,  the sacred drink that ancient priests and others imbibed in order to journey to the other world?

Two American researchers,  David Stophlet Flattery and Martin Schwarz,  lay out in minute detail the available scientific evidence for soma in their 1989 book,  Haoma and Harmaline:  The Botanical Identity of the Indo-Iranian Sacred Hallocinogen.  Researchers have long debated possible  ingredients.   But after detailed study,  Flattery and Schwarz concluded that ephedra was one of the key ingredients in the fabled drink.

There are dissenters and doubters of course.   But I think there is something very poignant here.  Illegal Mexican migrants swallow ephedrine pills by the handful today in order to get to a place they think of as the promised land.   But the ephedrine does them no good at all.

Each year, the American border patrol finds hundreds of their bodies lying out in desert. 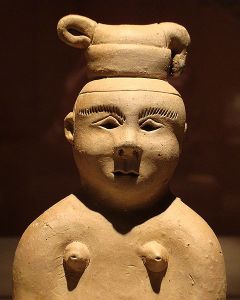 I can’t believe how badly the New York Times missed the point this morning in its article on the newly red-hot antiquities trade in China.   Journalist Dan Levin reports on the growing mania among  middle class buyers in Beijing for Chinese antiquities, extolling their newfound passion for ” Ming Dynasty porcelain vases,  19th century hardwood furniture and even early 20th century calligraphy ink pots.”  Such antiquities,  Levin explains,  “have become popular status symbols for an emerging middle class eager to display its new wealth and cultural knowledge.”

Too bad Levin didn’t ask a few  hard questions about exactly where all these Chinese antiquities  are coming from.  If he had, he might have come away with a very different impression.  While researching a new story for Archaeology magazine,  I recently discussed with Victor Mair,  a Sinologist at the University of Pennsylvania in Philadelphia, and one of the world’s leading experts on the archaeology of Xinjiang province,   this very issue.

I had noticed in Mair’s  articles that many of the most important Bronze Age and Iron Age sites in Xinjiang–sites that have yielded European-looking mummies and western grave goods and that are now revolutionizing our understanding of Central Asian  history–had been badly looted.  In fact,   looting in Xinjiang has become so serious that Chinese archaeologists are constantly forced to excavate entire cemeteries just to salvage and protect some of the finds.

I asked Mair what on earth was going on.  The Xinjiang sites, after all,  are in the midst of a huge and very barren desert–one of the bleakest and most remote places on earth. Mair explained to me that Chinese looters have become very sophisticated.  They journey into the desert equipped with GPS  and specifically target the ancient cemeteries there. The devastation is enormous,  Mair explained,  with mummified human body parts strewn everywhere.  “They just take the bodies,  the heads, the coffins and throw them out on the ground,” he said.  “They are looking for gold or they are looking for something that is obviously a nice artwork.”

Most looters then sell their finds to middle men in Hong Kong, individuals who don’t ask any questions.  “You can go down to the antiquities market street there,” said Mair, “and you can find unbelievable things, precious materials or precious objects from all over China being sold there.  So Hong Kong is like a  door for selling.”

To me,  this is the real story behind the newfound enthusiasm for antiquities in China. And there is a terrible irony here.   During the Cultural Revolution,  Mao Zedong ordered the destruction of  “old culture,”  officially condoning the looting of old cemeteries  and destroying antiquities.  Now the pendulum has swung wildly in the other direction,  as the Chinese middle class celebrates  its ancient culture.  But the change in attitude has only led to further destruction of the archaeological record.

The China Daily News carried a very cool story this week on a major new archaeological discovery in Hubei province. According to Shen Haining,  the director of Hubei’s cultural heritage bureau,  excavators working in a tomb that dates back to the  Warring States period of China’s history  (475-221 B.C. ) recovered a trove of water-saturated bamboo strips covered in inked Chinese characters.  Resembling a snarl of soggy noodles,  the strips are remains of ancient and exceedingly rare Chinese books–a find that is sure to generate huge interest in China and abroad.

Perhaps a little Chinese history is in order here  to help make sense of this find.  The Warring States period,  as its name clearly suggests,  was a time of massive violent military clashes.  Lords of seven major states all vied for supreme power in tianxia (which means “all under heaven”),  and they threw huge infantry armies bristling with mass-produced iron weapons at one another.   These  armies also boasted for the first time in Chinese history archers with crossbows and soldiers fighting on horseback,   both of which completely transformed military engagements in the Far East, rendering them far more horrifying.

The period came to an end finally when one of the combatant lords,  Qin Shi Huang, subjugated all his rivals.  But while the new emperor brought peace to China, he committed a grave sin against history and literature.  Fearing that all earlier books would cast doubt on the legitimacy of his rule,  Qin Shi Huang  ordered most Chinese books of the day to be burned and he had scholars who possessed such forbidden writings buried alive–making bamboo-strip books dating from the Warring States period rare indeed today.

You might ask yourself why we should care today about the fate of these lost Chinese documents,  many of which were recorded on bamboo strips.   Well,  it turns out that amid all the bloodshed and chaos of the time,   many of China’s greatest thinkers were discussing warfare and dreaming of peace.   Many of their works were undoubtedly lost in the destruction ordered by  Qin Shi Huang,  though a few,  including the very famous meditation The Art of War, survived to the present thanks to later copyists.

I am dying to find out what the soggy bamboo strips in the newly discovered Hubei tomb will hold.  “It’s still to early to tell,”  Shen told the China Daily reporter.  “Let’s wait and see.  Archaeology is all about surprise.”  Hear, hear.

Over the next week or so,  while I am off on holidays,  I will be posting archaeological or historical  photos that I  love for one reason or another.  Today’s photo,  taken by Drolexandre on May 20, 2008, focuses on the exquisite artistry in just one tiny corner of  The Forbidden City in Beijing. 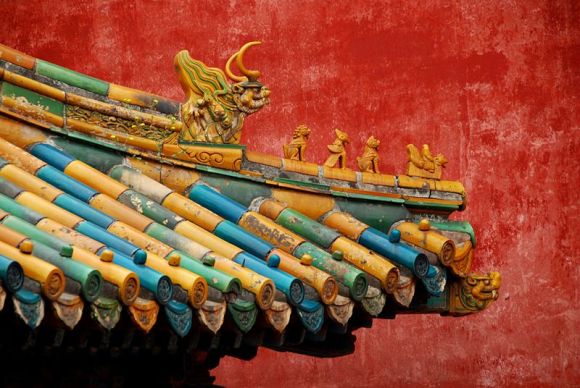