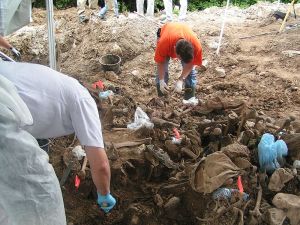 A community newspaper in London, England, carried an important article last week with an unusual request. According to the London Daily Advertiser,  a Romanian institute dedicated to the investigation of   Communist crimes in that country has put out a call for archaeologists to volunteer for the excavation of a mass grave in the Apuseni Mountains. According to the institute’s director, historian Marius Oprea, the mass grave in question contains the bodies of five anti-communist resistance fighters, including a pregnant woman, who were all killed by the Romanian secret service during the 1960s.

This sounds like a very worthy project,  and it reminds me of something I often hear from archaeologists–namely that they struggle daily to find a way to make their discipline relevant to students who are not particularly interested in what happened five years ago,  much less five centuries or five millennia ago.   And yet the techniques of archaeological mapping,  excavation and analysis are directly pertinent to crime scene investigation.

One year ago,  I published an article entitled “Witness to Genocide”  in Archaeology Magazine,  about a team of archaeologists and physical anthropologists who excavated several mass graves in Iraq,  at the height of the insurgency.  The team members risked their lives to dig and document the remains of  more than 100 Kurdish women and children who were secretly massacred by Iraqi forces in 1988 and buried at a site known as Muthanna in a remote desert near the Saudi Arabian border.

Michael Trimble,  a civilian archaeologist in the U.S. Army Corps of Engineers,  led the archaeological team.  And on November 30, 2006,  he took the stand as an expert witness in the trial of Saddam Hussein and several of his key supporters,  who were charged with crimes against humanity and genocide of the Kurds.  During four hours of grueling testimony,  Trimble presented the key results of the archaeological and anthropological investigation.   Here’s what happened on the stand (and please forgive me for quoting myself):

“As he spoke, he tried to maintain as much eye contact as he could with the judges. Partway through his presentation, however, he noticed one judge dabbing his eye. Two others soon followed suit. At first Trimble was puzzled, thinking something was wrong. Then he realized what was happening. “My God,” he thought, “they are all crying.”

The team’s meticulous excavation furnished a host of horrific and very telling details that brought the victims of the Muthanna massacre back to life.  And with the benefit of a geographical information system expert,  they reconstructed the crime in detail.  The security forces had literally mowed down the victims–some of whom were infants and very young children–as they stood in a prepared mass grave.  It doesn’t get much more chilling than that.

If this kind of forensic investigation is not a way to make archaeology relevant today,  I really don’t know what is.   Romanian historian Marius Oprea has put out a call for help. I sure hope some archaeologists will answer.