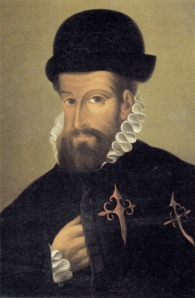 Who really conquered the Inca Empire?  I found myself mulling over that question for the first time today, after reading a really fascinating new paper published online in the American Journal of Physical Anthropology by a team of American and Peruvian scientists.  Led by Melissa Murphy,  a physical anthropologist at the University of Wyoming in Laramie,  the team has just pored over the skeletal remains of 258 Inca men and women,  who perished from extreme violence sometime between 1470 and 1540.

First,  let me very briefly summarize the conventional view of the Conquest of Peru.  According to the Spanish chronicles (the only surviving written source of the invasion),  Francisco Pizarro set sail from Panama in January 1531 with 3 ships and  180 men.   Landing near the port of Tumbes in the midst of a civil war in the Inca realm known as Tawantinsuyu,   Pizarro and his men journeyed inland.   At the Inca provincial town of Cajamarca, they laid an ambush and captured  the Inca king Atawallpa,  whom they subsequently executed.   In November 1533,  Pizarro’s force occupied the Inca capital of Cuzco, bringing the empire to its knees.

I personally don’t recall hearing or reading much about  indigenous Andean peoples fighting on the side of the  Spanish invaders.  But as the new paper by Murphy and her team points out,  aboriginal people  certainly seem to have played a part in the Conquest of  Peru,  and perhaps quite a large part.

Murphy and her colleagues examined human remains excavated from two large Inca  cemeteries in the archaeological zone of Puruchuco-Huaquerones,  7 miles from the center of Lima.  Many of these individuals likely died during the ill-fated siege of Lima,  when Inca forces tried to expel the Spaniards in 1536.  As expected, Murphy and her colleagues found ample evidence of severe injuries caused by medieval European weaponry–the top spike of a polearm, the beak of a war hammer,  and possible gunshot wounds.   (Intriguingly,  evidence of slashing injuries from swords is missing from these victims.)

But what I found especially intriguing in this study was the evidence that team-members found for wounds inflicted by  indigenous weapons,  such as clubs and maces.  Indeed,  as the authors note,  “the majority of perimortem injuries to the cranium were likely due to blunt force trauma, probably from native weaponry like maces or clubs,  with only a few of the injuries caused by Spanish weapons.”

Now of course,  Spanish soldiers might well have picked up native weapons and used them expediently.  But some Spanish chroniclers do refer on occasion to indigenous allies and I wouldn’t be at all surprised to learn that they were under-representing the numbers in order to make themselves look especially courageous to readers back home.

Moreover,  we know that the Incas had made a host of enemies during their own conquests, particularly on the northern coast of Peru.   And these dissidents might have seen Pizarro and his men initially as liberators,  before they truly understood the rapacity  of the Spanish forces.   Certainly, this is what happened in Mexico, when aboriginal people rallied to the banner of  Hernando Cortez,  eager to rise up against their oppressors, the Aztecs.

This new research by Murphy and her colleagues is the first forensic-style study of the Inca victims who fell during the Conquest of Peru.  I really look forward to reading more.