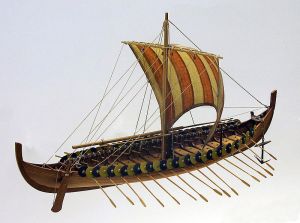 I read with real delight today the BBC  news  story about the Hebridean farmer who turned up a possible Viking anchor on the Isle of Skye.   The farmer,  Graeme Mackenzie,  was out trying to clear the drain from a pasture he wanted to turn into a potato field,  when,  lo and behold, he came across  what  looked to be a 10-cm-long rusted iron spike.   When Mr. Mackenzie went to pry it out, the piece of iron seemed to go on and on under the peat,  and eventually he had himself  a four-foot-long medieval anchor.

I have a great fondness for people who stumble upon important artifacts while out puttering around the garden or pasture,  and who then report their treasure to the authorities.  First of all, these accidental discoveries always open up the tantalizing possibility that any one of us could unearth something really crucial to archaeology while digging a new flower bed,  say, or putting in a  garage–especially if you live in the British Isles.   Moreover, people who find these dirt-crusted marvels often say really wonderful things to reporters,  quite off the cuff. Mr. Mackenzie, a former skipper,  admitted with modest pride,  for example,  to having ” some knowledge on anchors.”  He then went on to lay out his argument for the anchor being of Viking origin.  ” The metalwork,” he said, ” is totally different from the modern anchors.  It felt like a blacksmith had hammered it.  On the internet I saw a picture of a Viking anchor and it looked exactly the same as mine.”

Whether or not this will prove to be a Viking anchor,  however, remains to be seen.  Viking ship experts will want to take a very close look at the evidence before making any pronouncements.  But a Viking find of this nature would be very important for the Isle of Skye. History tells us that the Norse were a major presence on this North Atlantic  island from the 9th to the mid-13th century A.D.   Indeed,  there’s an absolutely fabulous line from a 13th century Norse saga,  Heimskringla,  about an ancient battle in Skye:    “The hunger battle-birds were filled in Skye with blood of foemen killed.”

But for all the long Norse presence on  Skye,  rather few Norse artifacts have yet turned up.  I sincerely hope,  for the sake of all Norse historians and archaeologists and all the Hebrideans who take such pride in their Norse heritage,  that Mr. Mackenzie is right about the Viking anchor.