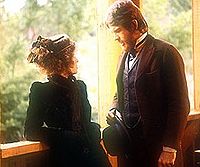 At one time or another,  we’ve all seen the private workings of a 19th-century brothel,  thanks to the silver screen.  My own  favorite film on this subject happens to be something that you will only see on the Turner Movie Channel these days:   McCabe and Mrs. Miller,  directed by none other than Robert Altman.

Did Altman get any of it right?  Well,  archaeologists have dug a wide range of 19th century brothels in recent years, including a very upscale establishment in Washington D.C.  that once catered to politicians.   Now an ongoing research project by Boston University archaeologist Mary Beaudry is shedding light on the life of a brothel madam,  Mrs. Lake, and her employees at 27 and 29 Endicott Street,  Boston.   For more,  see my new post at The Last Word on Nothing.